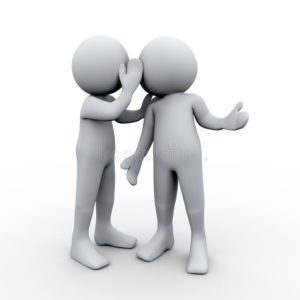 The “little ones” being referred to by this saying is not necessarily children; the reference is clearly to the disciples whose faith was still weak and wavering – men and women who would be easily influenced either for good or evil. Considering the weakness of human nature, the snares of the world and the temptations of Satan, there will be obstacles in the way of those who strive to follow Christ; many will be hindered along the way, many will stumble and fall, or even be persuaded to give up. But Jesus warns His disciples to guard against becoming the stumbling blocks of others. Anyone who causes a scandal to others will be liable to serious punishment.

The Catechism of the Catholic Church categorizes scandal as an offense against the respect for the dignity of persons, and in particular, an offense against the respect for the souls of others. According to the Catechism, scandal is an attitude or behavior which leads another to do evil. The person who gives scandal becomes his neighbor’s tempter. He damages virtue and integrity; he may even draw his brother into spiritual death. Scandal is a grave offense if by deed or omission, another is deliberately led into a grave offense. (CCC 2284)

Scandal takes on a particular gravity by reason of the authority of those who cause it or the weakness of those who are scandalized. Scandal is grave when given by those who by nature or office are obliged to teach and educate others. (CCC 2285)

Scandal can be provoked by laws or institutions, by fashion or opinion. Therefore, they are guilty of scandal who establish laws or social structures leading to the decline of morals and the corruption of religious practice, or to social conditions that, intentionally or not, make Christian conduct and obedience to the Commandments difficult and practically impossible. This is also true of business leaders who make rules encouraging fraud, teachers who provoke their children to anger, or manipulators of public opinion who turn it away from moral values. (CCC 2286)

Anyone who uses the power at his disposal in such a way that it leads others to do wrong becomes guilty of scandal and responsible for the evil that he has directly or indirectly encouraged. (CCC 2287)

Before we point a finger at people at others, let us examine ourselves: Have we, at any point in our life, been the cause of scandal to others? It could be due to a sinful behavior, or even by something that we once said or did, which influenced others. Sometimes, we can cause scandal by idle gossip, or even when we speak out of turn, or out of context. Usually, that happens when we say to someone, “Oh, I heard John Doe say so-and-so.” From that moment on, things may go way out of hand and as a result, mental or physical harm can be inflicted, and friendships can be damaged or destroyed.

October is Respect Life Month Every October, the Catholic Church in the United States celebrates Respect Life Month, and the first Sunday of October is observed as Respect Life Sunday. As Catholics, we are called to cherish, defend, and protect those who are most vulnerable, from the moment of conception to natural death. During the month of October, we pray especially for the protection of the dignity of human life.

First Saturday Mass will be on October 2 at 10:00 am. After Mass, Fr. Bill will continue the video series on St. Paul the Apostle. All are invited to attend.

Confirmation Class will meet this Sunday after the 10:30 am Mass in the Conference Room. Faith-sharing Group will meet in the Youth Room.