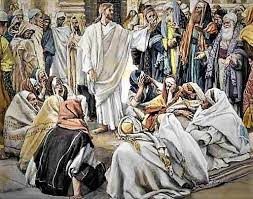 In the Gospels, the scribes and the Pharisees have tried many times to entrap Jesus with questions so that they could accuse Him of false teaching; they also watched closely the smallest actions of Jesus and His disciples so that they could accuse Him as a false prophet. Thus, the evil intent of the scribes and Pharisees form the backdrop of Mark 7:1-23, where the scribes and the Pharisees confronted Jesus on the subject of ritual purification; they saw that some of the disciples ate their meals with unwashed hands, so they challenged Jesus: “Why do your disciples not follow the tradition of the elders but instead eat a meal with unclean hands?” (Mark 7:5)

Mark 7:3 tells us that “the Pharisees and, in fact, all Jews, do not eat without carefully washing their hands, keeping the tradition of the elders.” The tradition of hand washing before meals derived from various practices concerning ritual purification (see Leviticus 15). The priests who performed the temple rituals were given gifts of oil, wine and wheat that could be eaten only after ritual washing. For various reasons, the ancient rabbis extended this practice to all Jews before eating meals. Along with other human traditions, the ritual of hand washing before meals were regarded by the scribes and Pharisees to have the same binding force as the Mosaic Law, such that failing to wash hands before a meal was considered as a significant transgression; some would go as far as saying that it was tantamount to having sex with a prostitute, or that acting contemptuously toward this ritual caused one to be driven out from society. From their point of view, it was that serious!

This punctilious observance of traditions by the scribes and Pharisees occupied their time with external purifications, and therefore drew away their attention from the more important duty of instructing the people to cleanse their hearts from sin and evil.

Jesus responded to the scribes and Pharisees by exposing their hypocrisy. Jesus quoted a prophecy from Isaiah: “This people honors me with their lips, but their hearts are far from me; in vain do they worship me, teaching as doctrines human precepts.” (cf. Isaiah 29:13) Jesus added: “You disregard God’s commandments but cling to human tradition.” (Mark 7:8)

Jesus pointed out that the scribes and Pharisees taught the people that they do not have to care for their ageing parents as long as they say that the support which they would have given is qorban. Qorban is a sacrificial offering to God; in the context of this Gospel passage, it is an offering that has been dedicated to the temple; however, a person is permitted to use it for himself but not give it to others, even needy parents. Thus, the scribes and Pharisees were, in fact, giving the people an excuse to violate an even greater commandment: Honor your father and mother (cf. Exodus 20:12).

Jesus summoned the crowd and taught them that it is not external uncleanliness that defiles a person; but rather, it is the evil that comes from the heart that defiles a person. Thus, Jesus not only abrogated the ritual of hand washing before meals; He also declared all foods clean (Mark 7:19). Jesus added: “From within people, from their hearts, come evil thoughts, unchastity, theft, murder, adultery, greed, malice, deceit, licentiousness, envy, blasphemy, arrogance, folly.” (Mark 7:20-22) It is from a corrupt heart that come forth corrupt reasonings, appetites and passions, and all wicked thoughts, words and actions which defile us. These are the things that we really have to watch out for.

On the other hand, this Gospel passage calls our attention to the times when we become overly scrupulous about following rules that we forget their original intent. When that happens, we become disciples of rules rather than disciples of Jesus Christ.

FIRST SATURDAY MASS AND FAITH SHARING Starting September 2021, Fr. Bill will host a faith-sharing group every First Saturday from 10:30am to 11:30am. For the first session, we will discuss St. Paul the Apostle by watching a new movie on St. Paul and follow up with a discussion. This is a great opportunity for all parishioners to learn more about the Catholic faith and to share it with others. There will also be a First Saturday Mass at 10:00am.

LABOR DAY Due to the parish picnic, the English Mass at 12:00pm on Labor Day, September 6 will be moved to 8:30am. 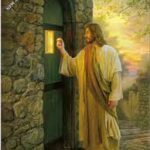