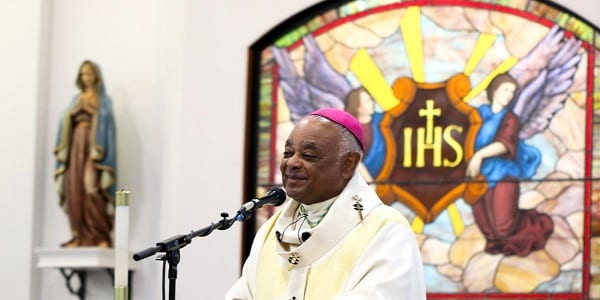 The following is an article from the Georgia Bulletin written by Andrew Nelson, staff writer and published on December 7, 2017 Msgr. R. Donald Kiernan, 92, the retired pastor of All Saints Church, Dunwoody, attended the dedication Mass for the mission. The Chinese community first began meeting at his parish in 1990. Photo by Thomas Spink

NORCROSS—More than 200 people celebrated the dedication of the first Chinese Catholic mission in the Archdiocese of Atlanta during a Nov. 19 Mass.

In a procession led by members of the Knights of Columbus in plumed hats, Archbishop Wilton D. Gregory blessed the Holy Name of Jesus Chinese Mission building on Light Circle in Norcross with holy water, installed a relic of St. Peter in the altar and covered the altar with chrism oil. Archbishop Wilton D. Gregory blesses the stained glass window above the altar at the dedication of Holy Name of Jesus Mission Nov. 19. Photo by Thomas Spink

“(God) dwell in this house of prayer,” said Archbishop Gregory during the sacred ceremony.

Faithful senior citizens sitting alongside moms and dads with toddlers marked the latest milestone for the 27-year-old community. Devotees prayed in English, Cantonese and Mandarin in the former Baptist church building.

Decorating the front of the altar is “Holy Name of Jesus,” written in golden Chinese script. A stained glass window displays two angels carrying a crest with IHS, an ancient Christogram for writing the name of Jesus.

A school cafeteria worker, Tsui drives 40 minutes to worship at the mission church.

The Chinese Catholic community in Atlanta formed in 1990, at first as a social club, then later for Mass in Chinese. The community gathered every week at All Saints Church, Dunwoody. In 2016, the growing community moved to the property at 5395 Light Circle.

The location includes three buildings on about six acres of land, which the community purchased for about $1.4 million, according to Catholic Construction Services of the archdiocese. The largest building is divided for worship and social gatherings. Two other buildings are used for offices and a two-story classroom building.

“I felt so blessed to have a community like this,” said Ky Phanhsavath.

Arriving as a teenaged refugee, he became Catholic after coming to Georgia. The native of Laos was moved by the care shown to his family by a Catholic family, and he decided to be baptized. The 48-year-old now works in the technology industry and lives in Duluth.

The mission community is made up of people from across Southeast Asian countries where Chinese immigrants put down roots. The shared heritage of “our culture, our language, our writing, and now our God” keeps people together, said Phanhsavath. Ky Phanhsavath stands at the altar during the dedication of the Chinese mission, which is attended by people from Southeast Asian countries where Chinese immigrants put down roots. A native of Laos, Phanhsavath was baptized Catholic after he moved to Georgia as a teenager. Photo by Thomas Spink

In the United States, approximately 8.5 percent of those with Chinese heritage identify as Catholics, according to a survey for the U.S. Conference of Catholic Bishops.

Speaking to the congregation during the dedication, Archbishop Gregory commended them for their history of worshipping together and for their steps in faith to risk setting up a parish, with all its responsibilities.

He said, “Risking is part of life and the very foundation of growth. Not risking, not venturing, not trying is a far worse state of life than failing.”

Reflecting on the day’s Gospel reading from Matthew, he said the parable of the servants and the talents is a story about people paralyzed by fear.

“Faith challenges us to risk doing the right thing,” he said. “Fear of the Lord assures us that we need not worry that God will ever withdraw his love, which is everlasting.”

He said people are given talents to be used for others. In Jesus’ parable, a man is chastised for his inaction.

“He didn’t take a chance with the gifts that were given to him. Let that never be spoken of any of us,” said the archbishop.

During the ceremony, the congregation applauded as the archbishop commended Msgr. R. Donald Kiernan, 92, the retired All Saints pastor who first welcomed a dozen Chinese families to convene and worship at his Dunwoody parish. The aging priest sat in in a wheelchair in a place of honor. Father Paul Flood, pastor of St. Benedict Church, Johns Creek, and Father Tri Nguyen, parochial vicar at St. Brigid Church, Johns Creek, also attended the Mass, assisted by a handful of deacons.

The connection with the All Saints community still remains. The Knights of Columbus honor guard was from the Dunwoody parish.

At one time, the community paid for Chinese priests to fly in and celebrate Mass. Today, they are served by Father Bill Hao, who was born to Chinese parents living in the Philippines. In 2009, he was the first priest of Chinese descent ordained for the archdiocese. Father Hao spends half his time ministering at the mission, spiritually nurturing the community and serving as administrator. He is also a parochial vicar at St. Brigid Church. The Holy Name of Jesus community is leaning on its 100 families to serve each other, from answering the phones and preparing a weekly community meal, to teaching religion and maintaining the grounds, said Father Hao.

After the dedication Mass, parishioners prepared a communal feast of tofu, rice noodles, fried chicken and many other Chinese dishes.

“It’s not just coming to Mass. It is a real community. Everybody contributes, but differently. It is all God and faith first,” he said.

Father Hao said his vision for the church is to be a center of prayer.

The priest said he reminds the community how with hard work and prayer more people fill the pews, and now they have their own church. Even Chinese communities in larger cities in the United States are amazed at what has been accomplished in Norcross, he said. The community sees it as proof of God’s care for the Chinese Catholics, he said.

“The most important thing is, it is God’s will,” said Father Hao. Some 200 people were on hand for the dedication of the first Chinese Catholic Church in the Archdiocese of Atlanta Nov. 19. The mission is located in Norcross. Photo by Thomas Spink 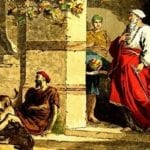