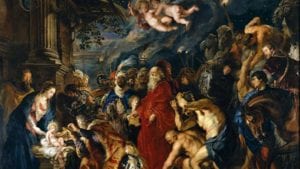 The Mystery of Christmas

Christmas is a mystery because its true meaning is revealed only to those who seek it, while it is hidden to the rest.

This mystery begins even before the beginning of the heavens and the earth, when nothing existed except for God. At a moment of His own choosing and in a manner in which He determined, God manifested His Word, and through His Word, He created the whole universe and all things visible and invisible. He thought of it, willed it, spoke the Word and so made it.

But sin entered the world through disobedience, and through sin, death (cf. Romans 5:12). The Word was hidden from the created world, but God made Him visible so that the world could be saved through Him. Therefore the Word became man and was manifested to the world through His birth. The Word, of course, is Jesus Christ the Son of God, and Christmas is the celebration of His birth. Christmas is the celebration of the birth of our Savior.

The Gospel according to John tells us so eloquently about Jesus Christ, who is the Word: In the beginning was the Word, and the Word was with God, and the Word was God. Through Him all things came into being; not one thing was created without Him. The world was made through Him, and yet the world did not know Him. He entered His own creation, but His own people did not receive him. But those who did accept and believe Him, He gave power to become children of God.

The message contained in those words is so important, that the Prologue of the Gospel according to John has been proclaimed by the priest for centuries each time the Traditional Latin Mass is celebrated. The mystery of Christmas is intended to be made known to all believers, and to be proclaimed not only during Christmas, but each time the Eucharist is celebrated, so that we may never forget it.

Let us celebrate the birth of Jesus Christ by being generous to the poor, with compassion to the needy and kindness to those that we meet, and with praise and thanksgiving to God.