The Law and the Prophets

HomeReflections The Law and the Prophets 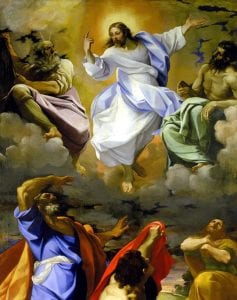 The Law and the Prophets

Peter, James and John witnessed the Transfiguration of Jesus, where His face shone like the sun and His clothes became dazzling white as light. But that was not all. A voice from a bright cloud said: “This is my beloved Son.  Listen to him. (Mk 9:2-8; Mt 17:1-8; Lk 9:28-36)” The light emanating from Jesus and the voice coming from the cloud revealed the divine glory and beauty of Jesus Christ.

The Transfiguration also signified that the Old Law and the prophets have come to an end. Moses represented the Old Law, Elijah represented the prophets. The Old Law and the prophets form the foundation of the Jewish religion and way of life; but the voice from heaven commanded that the disciples were to listen to the Eternal Word of God, Jesus Christ, as their Way, the Truth and the Life. St. Paul said, “For Christ is the end of the law, that everyone who has faith may be justified.” (Romans 10:4)

The Transfiguration conveys a profound message of hope. It marks the beginning of Jesus’ journey to Jerusalem, where He would carry out His mission of redemption. Jesus Christ descended into the depths of suffering and death, only to rise up into the heights of the glory of His Resurrection and Ascension. In the Gospel of John, soon after Jesus triumphantly entered Jerusalem, He told His disciples: “And when I am lifted up from the earth, I will draw everyone to myself (Jn 12:32).” Jesus was talking about the time when He would be lifted up on the Cross. True to His promise, the hearts of many people who have looked upon the Cross were moved. They have been spiritually transfigured. Through the light of Christ, we too can be spiritually transfigured.

No one likes to undergo pain, hardship and suffering. Sometimes it causes people to lose their faith and trust in God. But the trials and difficulties of life are inevitable. Perhaps if we could look at the trials and difficulties of life not as an end, but as a means to deepen our faith and trust in God, then the consolation that that brings would already be a foretaste of the glory in heaven which we hope for.