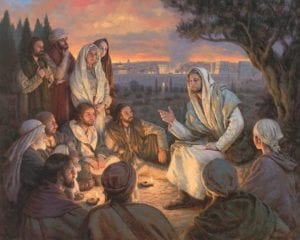 The Book of Isaiah chapter 63 talks about an event which took place around 500 B.C.; this event was the return of the Israelites from exile in Babylon. It expressed hope that despite the people’s sinfulness and neglect, God will not forsake them. It says: “Oh, that you would rend the heavens and come down… no ear has ever heard, no eye ever seen, any God but you doing such deeds for those who wait for Him (Is 63:19; 64:3)!” This is the hope of not just one person; rather, it is the hope of thousands of people returning to their homeland from exile. It is a hope that they would make their relationship right with God. In Isaiah chapter 63, the prophet was referring to the things that the Lord Jesus will say and do, which no one has ever heard or seen before. This prophecy was fulfilled in the First Coming of Christ: His Incarnation and Nativity, His ministry on earth, and His Suffering, Death and Resurrection.

On the other hand, Mark chapter 13 speaks of an event which will take place in the future. Chapter 13 begins and ends with the call to be watchful, to be always on guard and to be vigilant. The parable of the servants who were left in charge in their master’s absence illustrates the need to be watchful. Since they do not know the exact time of the master’s return, the servants should be busy doing their work, so that when the master returns, he will find them doing their duties. In the parable, the servants represent Christians, the master represents our Lord Jesus Christ and the master’s return represents the Second Coming of Christ.

There have been times when Christians have become complacent from being watchful for the Second Coming of Christ. We have rest assured that all diseases have been virtually eliminated, the supermarkets were well-stocked and the stock markets were stable. During those times, many people had the illusion of longevity, permanence and control. Then COVID-19 happened. What seems to be a hallmark of certainty in modern society, like the constant availability of food, medicine and daily necessities, is in fact quite fragile and uncertain. The fact is that man still has no direct control over the forces of nature, or the mutation of new strains of viruses.

The parable of the servants teaches that the servants must be busy doing their work when the master returns. What is this work? We all have different jobs to do, but one kind of work that all Christians should do is to pray. A Christian is always watchful in prayer. While Isaiah chapter 63 expressed hope for the First Coming of Christ, Mark chapter 13 expresses hope for the Second Coming of Christ. As Christians, we believe that God has indeed rent the heavens and come down in the First Coming of Christ. Now, we await His Second Coming in glory.